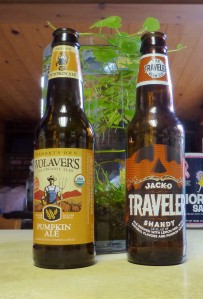 So, every couple of months my husband’s office goes out and buys a bunch of cases of beer and mixes and matches them. Currently, we’re working on a batch of pumpkin brews and Oktoberfest beers.

Now, I’d like to say something about the pumpkin wagon. Specifically, that I am not on it. It seems like a lot of breweries are content with throwing some cinnamon and sugar in a beer, thinking up a clever name, and slapping a pumpkin on the label. There just doesn’t seem to be a lot of thought put into the end product of the beer. That said, I’ll start my reviews with the best of the bunch.

This beer is pretty, “Winner, winner, chicken dinner!” Cinnamon and citrus with a juicy pumpkin taste. All the flavors are balanced and my husband had this finished before I got more than a few steps. I’m not familiar with this brewery, but I’ll keep my eye out for them.

It’s okay. A bit of a bitter aftertaste. Some cinnamon. Honestly, I wasn’t expecting much from this brewery. They’re consistently mediocre.

Sweet, cinnamony, pumpkinish, and a bit cloying in the heat. A better beer to split than to have alone.